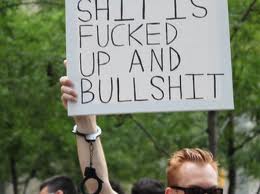 So I would like to welcome Obee to TbowsWorld. He gave me some good blog ideas so I figured I’d give him his own page, you should all check it out. Anyways, I do not know how I haven’t written about this yet. I cannot stand the “Occupiers”. I am embarrassed that most of the ones behind this are from my generation, and apologize to all who were affected by this horrible display of…um…protesting? I think in order for it to be a protest there needs to be a goal, though. The only good thing about the Occupy protest was the fact that it gave me a cheap Halloween costume. Granted nobody had any clue what I was I still thoroughly enjoyed it. The greatest part about it was that people assumed I was dressed up as a bum or a homeless person, and they would not be wrong in assuming that. All of the Occupiers were hippies and people who looked like they shop once a month on food stamp day.

Every single time I heard one of them talk or saw a sign of something like “Bail me out” or “Give me a Job” I literally wanted to throw up. People, this is America. We pride ourselves on being a country of opportunity, where everyone has an equal shot at becoming successful. Most of the people protesting were just young people who had everything handed to them and are now faced with the real world and having to do things on their own. You don’t see illegal immigrants standing in the street complaining because, guess what, they are scooping up jobs left and right. Instead of these unemployed people actually looking for a job or taking any job they can get, they are doing what Cousin Eddy from the Vacation movies is doing and “holding out for management positions”. How can you possibly think standing in a park with thousands of hippies will get you any closer to getting a job? Why should these people have all this money and we have none that isn’t fair. Well you’re right it’s not fair. Life isn’t fair. People work hard to get where they are. The CEO’s of these large corporations didn’t get where they are by standing in a park I’ll tell you that much. I could go on forever about how much I hate the Occupiers but instead I’m gonna have you go to this link to listen to Adam Carolla’s opinion on the Occupiers. http://www.youtube.com/watch?v=cJD8pZiRIzs

And P.S. I am not the 99%. I am not part of your group. I am the .08% because I get drunk and laugh at you people. It’s too bad they kicked all of them out of the parks, now they have to go back to living on random benches. What a shame.