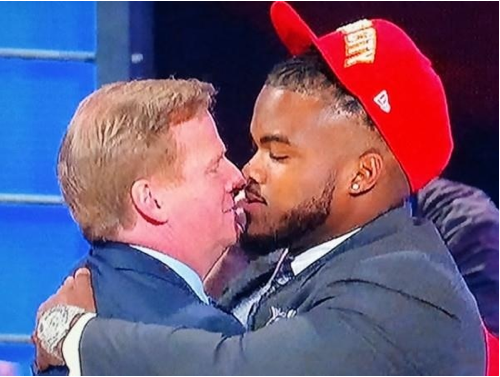 We have been about a month in to the “no need to watch Sports Center” time period which is when ESPN is filled with baseball highlights and tennis or golf. The only thing worse than hearing about LeBron all day every day is hearing about baseball, tennis and golf every day. Now we can safely say it’s football season and sports will be relevant again. We aren’t stuck with watching this sinking ship known as the Red Sox who have somehow put together the biggest team of pussy’s ever assembled. I mean they are worse than any normal soccer team. Newsflash: you guys are getting paid millions of dollars to play a game. I don’t care if you get one day off a month, I don’t care if you have to work your ass off for 6 months a year. All of us have to work 40 hours a week at a miserable job for the rest of our lives, and you have guys like David Ortiz complaining every day because his 14.5 million dollar 2012 contract isn’t enough and he wanted a multi-year deal. Or maybe Jon Lester who is pitching like Darnell McDonald and looks like he wants to off himself every time he takes the mound. Youk ratted on his teammates and decided to go into a shell until he got shipped out of here for a bag of baseballs, and Ellsbury and Crawford just enjoy watching the games from the dugout and taking the Sox money, maybe taking some Japanese lessons with the ultimate shitbag himself Dice-K. End the season now and trade them all except for Pedroia. Give me 1 million dollars a year and ill go out to center field in a wheel chair trying to catch a baseball. Or maybe they should line all of them up at Pat’s training camp on their next day off and let Mayo and Chung tee off on them.

Someone needs to explain to me why the Patriots keep signing tight ends. Are they trying to run a tight end monopoly? All I know is Vick has been talking Eagles dynasty and I dig it. They had bad overall season, but people forget how good, wait not good, dominant they were over their last 4 games. Their defense that should be dominant only gave up 46 over the last 4 games of the season and their offense put up 125. Yeah sure Vick has only played one full season but I don’t think it’s possible to have a worse offensive line than they had last season. They all looked like Michael Oher at the beginning of the Blind Side not the end. Looking at damn balloons in the air or God knows what. Also don’t forget they went 5-1 in the NFC East last season. They are bound for the Super Bowl this season, no contest…unless of course the Jets decide to hand the starting QB job over to my boy Timmy T. 41 days, I’ll see you there. I will also be starting a fantasy football once a week page, but I can’t give away too much info because my good friend Tom Bomb will steal all my strategies.