Now, before you all get upset at the headline, let me explain myself. As a huge NBA fan, I watch a ton of games every year and listen to a lot of broadcasts. The NBA Players Only broadcasts are a disgrace to basketball, and I really don’t expect that to be a thing going forward in the near future considering all of the horrible things people say about it every game. But of all the broadcasters, in all the broadcast villages, in all the broadcast towns, Tommy Heinsohn is by far the worst and it’s not even close or debatable. Yes, he is a Hall of Famer, yes he was good at his job at one point, yes he is a Boston legend but lord have mercy the guy cannot call basketball games anymore. 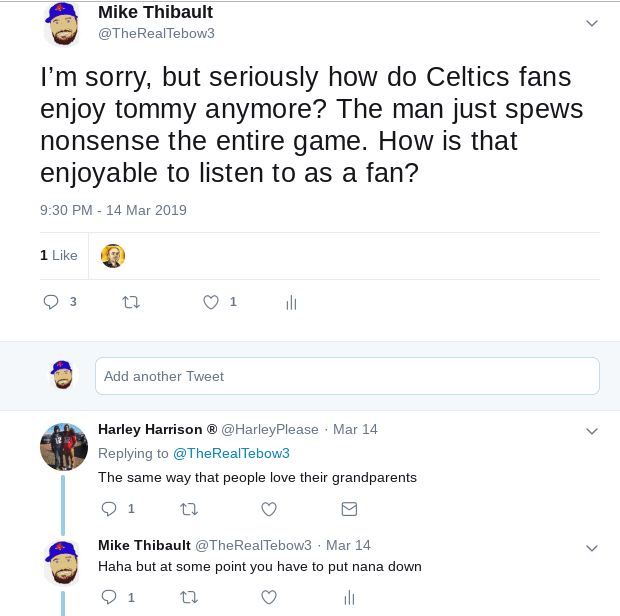 Sure, I’ve heard fans love him like they love a grandparent, and I’m not saying I believe in euthanasia, but I’m also not saying that I don’t believe in euthanasia. There comes a point where it’s not funny anymore and it’s just actually sad. As a fan, there is no way you can enjoy watching your team play every night and having the guy on the broadcast clamoring for every foul call, every non foul call, and screaming nonsense every 2 minutes. Jack Edwards catches a lot of heat in Boston for being a homer and a fanboy, and he isn’t anywhere close to as bad as Tommy, so I just don’t understand how they let him keep his job. Obviously they’ve dialed him back a bit as his health has gone downhill, which the health part sucks, but they need to just let Scal take over. The fans don’t need to hear how Greg Stiemsma reminds him of Bill Russell and what Aron Baynes looks like in the shower room. I think deep down everyone in Boston knows it’s time to bring him behind the shed, but they don’t want to say it. He had a great career as a player, coach and broadcaster, but it’s time to let him spread his wings and watch Celtics games from his bedroom in his footie pajamas.

I was watching ESPN the other day, and since College football is almost done, they are starting to talk about the NFL draft and who is projected to be picked in the first round. I heard the name Mel Kiper Jr. for the first time this year and I wanted to throw up. Just hearing his name makes me angry, and that inspired me to make this list of the top 6 celebrities I hate the most. Feel free to comment and add in whoever you hate too, the more the merrier.

7. Kanye West/John Mayer/Anyone who broke Taylor’s heart- Ok so this was only going to be a 6 person list then I remembered these horrible people. Kanye West had probably the biggest scumbag move of all time when he jumped on stage of the 2009 VMA’s when Taylor Swift was accepting her award for video of the year. Listen Kanye, Beyoncé’s video sucked. It was her and two dancers dancing in a white room. No creativity, no nothing. Plus you are a scum for taking up my entire Twitter feed the other night talking about God knows what with you and I can’t even come up with anything because it made no sense. And you John Mayer….I hope you wake up every morning to Dear John and cry because I do. Just kidding…but seriously. No, he is a horrible person who shouldn’t have even been dating Taylor or whatever they were. T-Swifts mom should have known after listening to Daughters by Mayer that all he wants to do in life is snatch up your daughter and get them prego. Always be cautious of a guy who sits by himself playing acoustic. Then anyone else who broke T-Swifts heart, you suck and I hate you. If she would have met me when she was 15 she would have nothing to write about.

6. Bob Costas– I actually started the list off without Bob Costas and knew I couldn’t make this list without him so I added a spot. This guy is the least funny person I have ever listened to in my life. He never used to try to be funny, at least not that I can remember, but recently he has tried and it just doesn’t work. I really hate him for his rant this season on Sunday Night Football about the players and their celebrations after touchdowns. I wanted to reach through my TV and punch him right in the face. He is the reason the NFL is the no fun league. Listen Bob, there is a reason they only let you do your rants right in the middle of halftime, it’s because nobody is watching.

5. Kevin Garnett/Paul Pierce– I am putting these two as a combo because I just couldn’t decide who I hate more. Garnett is the biggest wannabe thug I have ever seen, and I wish someone would just clock him. Take it easy KG, the game just started and you have a bucket of sweat dripping off you and you are swearing to yourself up and down the court. Pierce is just a soccer player in a basketball uniform. That guy flops more than anyone I have ever seen, and I have seen a lot of floppers since I am (or was) a Duke fan. I have no idea how he is going to live this season with the NBA taking away shooting fouls for when players throw their arms in the air after a foul in order to make it a shooting foul. That was the biggest crock in NBA is when players did that and nobody did it more than Pierce. Be thankful you two are only number 5 on my list.

4. The entire cast of Jersey Shore (minus Pauly)- I’ll admit it, I watch Jersey Shore. So what. It is great entertainment, and whoever came up with the show is a pure genius. However, it is embarrassing that this is what American entertainment has come to. Maybe I hate them because I wish I could get paid to go to clubs, get drunk, fight, and sleep all day but regardless of why, I still hate them. Pauly is the only normal one, and I say normal as in the most normal he could possibly be for being a Guido on the Jersey Shore. I used to like Vinny and thought he was “normal” until the season premier a few nights ago when the guy was crying because he missed his mom and family. Bro, you are getting paid to get drunk, go to clubs, and sleep. I think you can handle not seeing your family for 3 months, or god forbid what happens when you have to get a real job like the rest of America and have to move out of your house. Don’t even get me started on Ron and Sam. The best line I think of all time in the history of the world was when Ron said something like “I love you, that’s why I at least cheated on you behind your back instead of right in front of you”. It was something like that, but regardless that is definitely true love right there. Anyways, great TV show but I hate you all.

3. Joe Buck– Wow. That is all that comes to my mind when I listen to anything Joe Buck says. Especially now a days he has this whole not caring tone in his voice. It’s hard to explain but I know I’m not the only one who noticed it. It sounds like he has 3 of Tim McCarver’s tampons shoved up his nose, you know, that sound. I’m not really sure why I hate him. Maybe it’s the fact that he’s like 5 feet tall or the smug look on his face every time they show him on camera. Maybe it’s the fact that he hates every team that I root for. The best moment in my life was in 2004 when the Red Sox won the World Series and you could hear the pain in Joe Buck’s voice when he said the Red Sox were World Champions. I guess I just don’t like him because he never really adds anything interesting to any game he does. He’s like Joe Morgan on the old Sunday Night Baseball games, “You know, if he swings and pops it up and they catch it, I think it’s a good chance that will be an out”. Yeah thanks Joe, wasn’t sure if that would be something else. Thank god he was canned. Anyways, I hate you Joe Buck. That just has a good ring to it. T-shirt idea?

2. Tommy Heinsohn– I hate him even more right now for the fact that I am not putting him number one. If you know anything about me, you know how much I hate Tommy Heinsohn. The thing is, nobody really agreed with me that the guy was off his rocker, and people are starting to realize that this season. This guy amazes me every time I listen to him speak, and that is not very often. He is so bad, I have watched Celtics games on mute so I did not have to hear the ignorant, biased comments he made on a daily basis. The ball could literally be thrown off Paul Pierce’s head and bounce 8 rows into the stands and Tommy would either yell and scream how it wasn’t out-of-bounds on the Celtics or that Pierce deserves a Tommy point for taking one in the forehead. I’m pretty sure he even gave KG a Tommy point when he called Charlie Villanueva a cancer patient. Maybe Heinsohn was a good announcer at some point in his life, I can’t even wrap my head around the notion that this guy coached in the NBA. Either way, it’s his time. The bell has rung. Hang em’ up and go have a few beers with John Madden and talk about Greg Stiemsma and half the guys on the Patriots that John Madden still can’t pronunciate. Uh Tim Brady, oh I’m sorry that s Tom Brady. Seriously though, this hurts that I have him at number 2 but maybe one day he will make it to number one.

1. Mel Kiper Jr. – This guy is only on TV two months, if that, out of the year and I hate him more than anyone. This is a genuine hate too. I hear his voice and even his name and I get angry. I really don’t even know why. Maybe because he gets paid to give his opinion on something as stupid and meaningless as the NFL Draft. Like, let’s be honest. What in the world does you giving me a list of YOUR top 10 players do for anyone? He gets paid to do a mock draft that has no effect on anything. For the most part he is wrong every year too. He is worse than weathermen. The thing is, he thinks he is God’s gift to Earth. I don’t even think any of the other ESPN analysts like him either. At least analysts who do baseball games or football can give us information that maybe we missed in a game or didn’t understand, but Mel Kiper just gives us a list of players and who he would pick if he was these NFL teams. Give me half his salary, a list of the guys in the draft and a hat and I will give you my opinion and the same thing will happen.