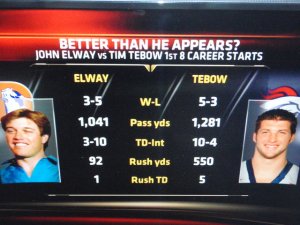 Today’s game was embarrassing to watch as a Tebow and Bronco’s fan. The only explanation I have for the last three weeks is that the Bronco’s don’t want Tebow in Denver anymore. That has to be it. What kind of play calling do they have going on? They know Tebow’s strengths and his weaknesses and they played the last 3 weeks right into his weaknesses. Well, not the Patriots game but the Bills game. How can any team not call a passing play on first down for an entire half of football? This week and last, Tebow did not attempt a pass on first down. Tebow is a quarterback that runs off of momentum and game flow. 2 yards on first down, 2 yards on second down and 3rd and 6, two receiver set is a recipe for disaster for any quarterback. Tebow looked awful today when throwing, but give a lot of credit to the Kansas City corners. They shut down one of the best offenses in the league in Green Bay, and left nowhere for the Denver receivers to go today. The Bronco’s left Tebow out to dry the last 2 weeks, plain and simple. Give the guy 6 or 8 pass attempts in the first half and expect him to throw 20 times and save the day in the 4th quarter just isn’t going to happen. I feel bad for the Denver defense today. They played great, well pretty good, and they wer hung out to dry by John Elway’s hate for Tim Tebow. 4 minutes left in the fourth down by 4, ball on KC’s 45 yard line. 3rd and 7 or 8 and you run a pitch play that you ran about 8 times earlier in the game. Are you kidding me? If that isn’t proof right there that the Bronco’s don’t want Tebow to succeed then I don’t know what is. One minute left in the game that decides if your team is going to the playoffs this year, and John Elway is up in his press box, ho-hum, texting or tweeting away, not a care in the world. Be strong Denver fans, and keep demanding Tebow and don’t let them run him out of the city. They have what it takes to beat the Steelers next week, if they decide to let Tebow start the game instead of just hoping he can finish it. The Bronco’s have something good, they just can’t expect to play that conservative and win. There are even some things Jesus can’t overcome.